When it comes to the division of your assets and debts as part of a divorce, New Jersey is an “equitable distribution” state.

This means that marital property, including debts, is not automatically split 50-50. 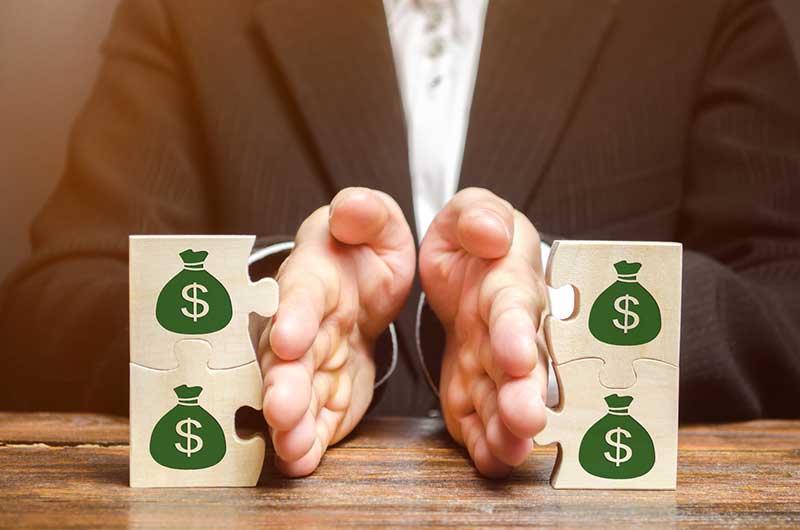 Rather, equitable distribution is defined as the division of marital assets and debts in a manner that is fair (“equitable”) but not necessarily equal.

New Jersey courts have developed a three-step process to distribute assets and debts. First, the court will identify which assets are subject to distribution, or “in the pot”. Assets and debts included in equitable distribution may range from the marital home, a business, bank accounts, automobiles, stock options, pensions, frequent flyer miles/points, points on credit card accounts, bonuses, commissions, lottery winnings, and all credit card and other debts acquired after the date of marriage. Generally, courts have defined marital property to be property acquired by either or both spouses from the date of marriage to the filing of the divorce complaint.

Conversely, some main categories of “separate property” (not “in the pot”) include property acquired prior to marriage, property acquired during the marriage as gifts from third parties or by inheritance, or property acquired after the filing of the divorce complaint from post-complaint efforts. Courts have held that separate property must be kept separately and not allowed to be co-mingled to prevent it from being identified as marital property. In other words, if one party inherits money during the marriage, the other spouse may not make a claim to any of that money should the marriage fail, unless the spouse who inherited the money used it during the marriage for the family—put in a swimming pool, made improvements to the home, bought cars, etc. That is called “commingling”. This commingling makes that part of the inherited money a part of the marital estate, or in the pot. In addition, if separate property is improved during the marriage, it may also become marital property; for example, a two-family home owned by one spouse that improvements are made on with marital money during the marriage, the value of those improvements may be “in the pot”. Courts will also consider whether any incremental value to the property was a result of a market fluctuation or a result of the contributions and efforts by one spouse towards the asset’s growth, to determine if the increase in value is in the pot.

Next, the court will value the marital property for purposes of distribution. This step may be as straightforward as looking at bank statements or it can be a more complicated process such as retaining an appraiser or accountant to value a business, or to analyze business benefits, such as deferred compensation, restricted stock or stock options, a business credit account, a business car, or the like.

In step three, the court is granted wide discretion to determine the most equitable way to distribute the assets. In accordance with New Jersey’s Equitable Distribution Statute, courts will consider the following factors:

This list of factors is not exhaustive, meaning the Court can consider any other relevant factor.

One purpose of this statute is to take into account the role of a homemaker or stay-at-home parent or spouse in what courts have viewed as a joint enterprise. Thus, if one spouse acquired all of the marital assets through earned income while the other spouse stayed at home and took care of the children, a court would recognize that the marriage is a partnership and would presume that the marital property was acquired through the efforts of both spouses.

Several important factors to keep in mind about equitable distribution are as follows: First, one should note that generally, the time period for determining what property is acquired during the marriage is the period from the date of marriage to the filing of the divorce complaint. Under New Jersey law, which spouse has title to something, or whose name a debt or asset is in makes no difference when it comes to distributing the assets and debts. For example, if a house was purchased in the husband’s or wife’s name during the marriage, it could still be considered marital property subject to equitable distribution. Finally, one should also note that courts have excluded fault as a factor in the distribution of property at the time of a divorce. One behavior during the marriage will have little bearing to a Judge in determining how the assets and debts should be divided.

Very few divorce cases actually go to trial in New Jersey. This is the result of spouses making the decision to resolve their issues privately, either with counsel or without counsel. Equitable distribution of assets and debts can be highly complicated and is not to be taken lightly. Documentation should be shared between the spouses as to all bank accounts, credit card statements, loan statements, evaluation of each car, boat, or motorcycle, and appraisals of any fine jewelry or artwork. The good news is that the Court need not get involved at all  if the spouses gather all the information necessary to try to determine how to divide their assets and debts “equitably”.

Speak with an attorney who specializes in family law to answer your questions on equitable distribution.

With decades of experience in family law, Claire Scully is well-equipped to handle any child support questions and unique situations you may have.